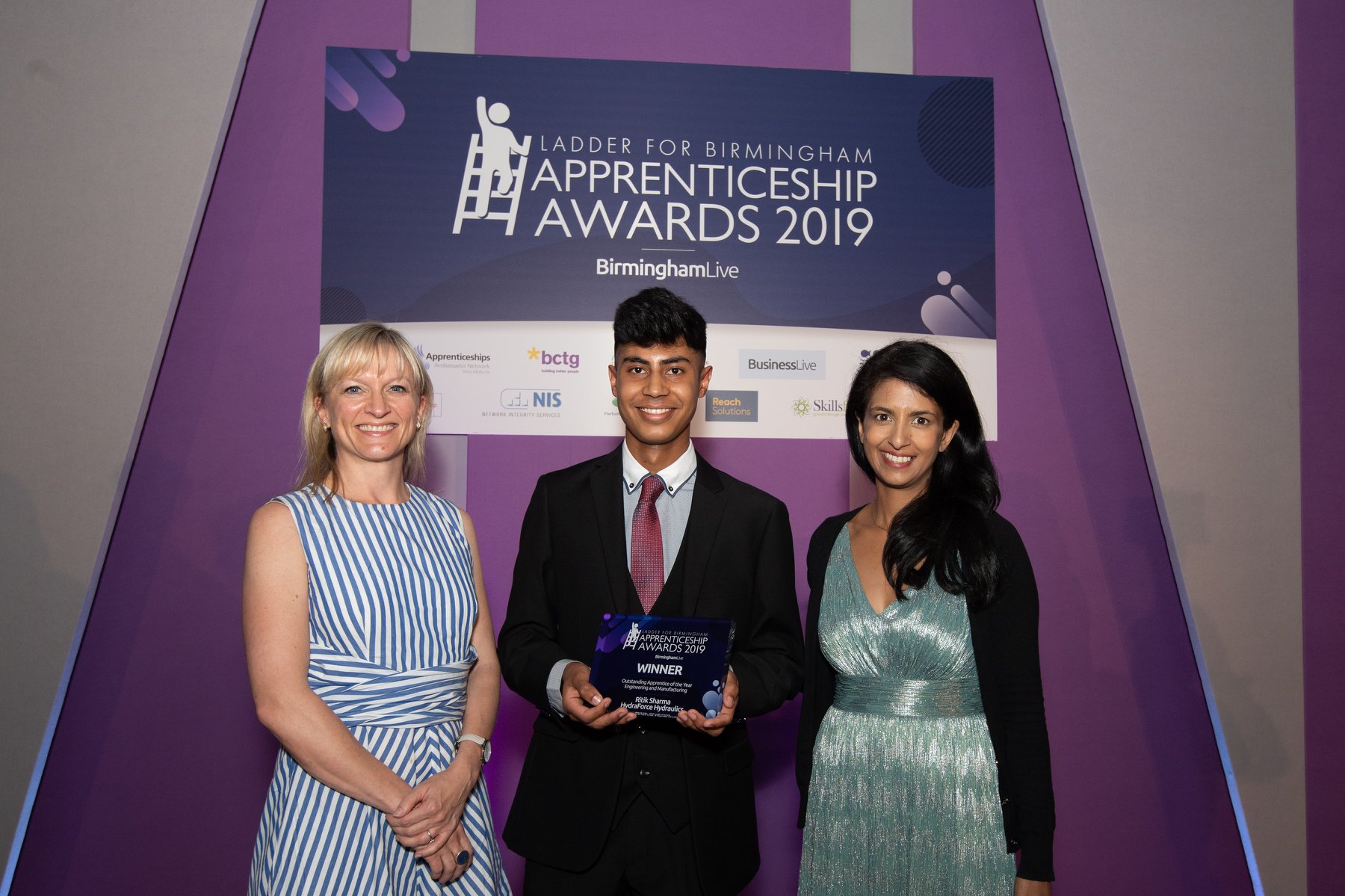 HydraForce Hydraulics Ltd is delighted to announce that they have won awards in two categories at last week’s Ladder for Birmingham Apprenticeship award ceremony held at Edgbaston Cricket Ground.

The company won Large Employer of the Year and their third-year apprentice, Ritik Sharma, was winner of Outstanding Apprentice of the Year for 2019.

“Winning the Outstanding Apprentice of the Year for Engineering and Manufacturing award is an absolute honour” said Ritik, who studies Mechanical Engineering

“It truly highlights the limitless possibilities available through the apprenticeship scheme offered by HydraForce. The support and training provided by the company has allowed me to continually grow as a professional and individual; and this award reinforces the idea that doing an apprenticeship is the best route to a successfully career in engineering”

Ritik competed against three other Engineering & Manufacturing apprentices in the region, including fellow HydraForce Electrical & Electronic Control Engineering apprentice Joshua Lambden, who won the Runner-up award in this category:

“Firstly I feel proud to have been shortlisted for the awards and am happy that I was able to achieve the Runner-up award” said Joshua shortly after the ceremony, “I’m even happier and proud of my colleague Ritik Sharma, for winning the first of many awards to come. He is a well-deserved winner!”

The company, which produces hydraulic valves and manifold systems, also won the award for Large Employer of the Year for apprenticeships, sponsored by the West Midlands Apprenticeship Ambassador Network.

Christine Tolley, Head of Human Resources accepted the award on behalf of the company:

“HydraForce is thrilled that another of our apprentices has won an award - Ritik’s hard work and commitment is testament to his success. Better still, the business has also been recognised by Ladder for Birmingham for its Apprenticeship Scheme. We firmly believe that apprenticeship programmes add a great deal to any business and are pressing forward with our plans to expand beyond engineering into other areas to develop our workforce and help us remain competitive in the industry” said Christine upon receiving the award.

HydraForce has taken apprentices since 2004 and was against three other employers from the Greater Birmingham region within its category, including West Midlands Ambulance Service and Sandwell & West Birmingham Hospitals NHS Trust.

The Ladder awards attracted over 100 applications this year and is part of the wider Ladder for Greater Birmingham campaign launched in 2018 to create 1,000 new apprenticeships across Birmingham and Solihull.