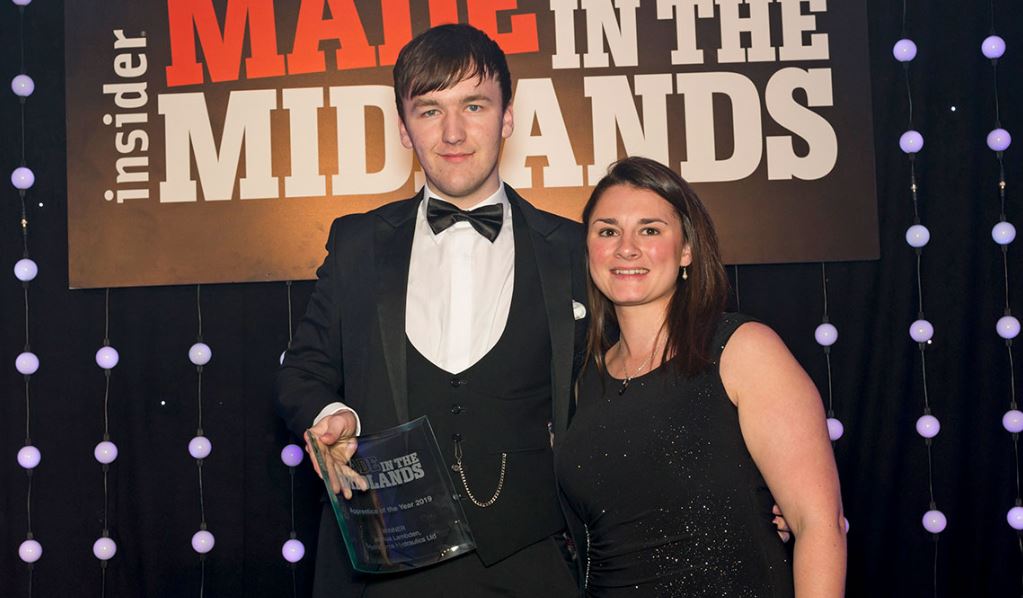 HydraForce Hydraulics Ltd is delighted to announce that their third-year apprentice, Joshua Lambden has won the Made in the Midlands Apprentice of the Year award 2019.

The event, which was held on Thursday 2nd May at the Burlington Hotel in Birmingham City Centre, saw Joshua compete against eight other manufacturing apprentices in the region:

“I was ecstatic to have been shortlisted for the Made in the Midlands apprenticeship award but to go on to win it, has truly blown me away. Manufacturing is an ever-changing environment where the only limit is your imagination. It just goes to show that if you work hard at something, you can achieve anything” said Joshua, after receiving the award.

Joshua was competing against other apprentices from companies including Pressing Solutions and Lander Automotive. Ritik Sharma, another third year apprentice from HydraForce, was also shortlisted for the Apprentice award:

“As a business, we believe strongly in the value of apprenticeships, not only because they help us build our pipeline of talent but also because apprenticeships provide people of all ages with an opportunity to combine academic learning with practical experience”  said Managing Director, Tony Brown, who attended the awards ceremony; “We are very proud of Joshua’s achievement tonight and are confident he has the foundations of a very promising career in engineering”

Following success as Apprentice of the Year at the regional awards, Joshua will now attend the National Awards, which will be held on Thursday 20th June in Coventry.

HydraForce, the manufacturer of hydraulic valves and manifold systems, was also shortlisted for the Export Award at this year’s awards. This follows a successful 2018 where they achieved a record turnover of £109.1m for 2018, exporting £17.4m worth of total sales to Asia last year and £3m worth of product to HydraForce’s Brazilian associate company: HydraForce Ltda.

The Made in the Midlands awards attracted a record number of entries this year, which resulted in 64 shortlisted nominees from fifty different companies. The ceremony consisted of ten different award categories ranging from Apprenticeships to Food & Drink; and celebrates Manufacturing in the Midlands region.