To make hay while the sun shines means to seize opportunity, and that’s just what Tubeline Manufacturing did when they decided to upgrade their inline bale wrapping machines. The Canadian-based company already had a successful machine with their AX2 bale wrapper. The hydraulics caught the attention of Bob Dewaele of Fluid Power Sales, Inc., based in Baldwinsville, New York. “When we saw the hydraulic circuit with industrial style switches we thought it would be a good candidate for a block manifold solution with HydraForce proportional control valves,” he said.

Tubeline was open to the idea of improving the hydraulics on its bale wrappers so they worked with Fluid Power Sales and HydraForce on a new system that integrated electrohydraulic controls. This, in 2014, the ECV series of bale wrapping machines was born. Incorporating electronic control with the hydraulics provided Tubeline with a number of advantages. Consolidating all hydraulics into a single manifold block reduced its “footprint” by 10 to 15% while allowing additional hydraulic functions. The new hydraulic system consolidated all valving into a single manifold upgraded with proportional controls, an electronic control unit with a custom wiring harness, and a programmable operator display. The new design allows Tubeline the flexibility to offer various control options for the ECV baler.

Electronically controlled HydraForce proportional directional control valves provide a performance advantage for the wrapping function, which meters out plastic wrap to cover the bale. “The wrap is fragile and easily torn, explained DeWaele. “However, with proportional control, the valves can be electronically “ramped” to soft-start the wrapping function, virtually eliminating the risk of broken plastic wrap,” he said. The wrapping function employs a priority-on-demand circuit, utilizing a HydraForce EC16-42 pressure compensator and a PV70-33 proportional flow control valve. The new design also had simplified wiring and convenient thumbstick control for both steering and forward/reverse motion. 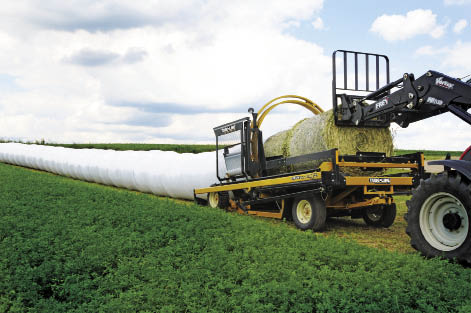 The Tubeline ECV bale-wrapping machine now uses the power of proportional control to wrap bales right in the field. 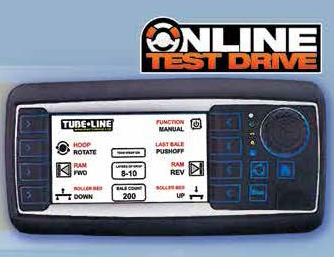 Since June 2016, Tubeline customers have taken more than 12,000 online test drives of the new baler.